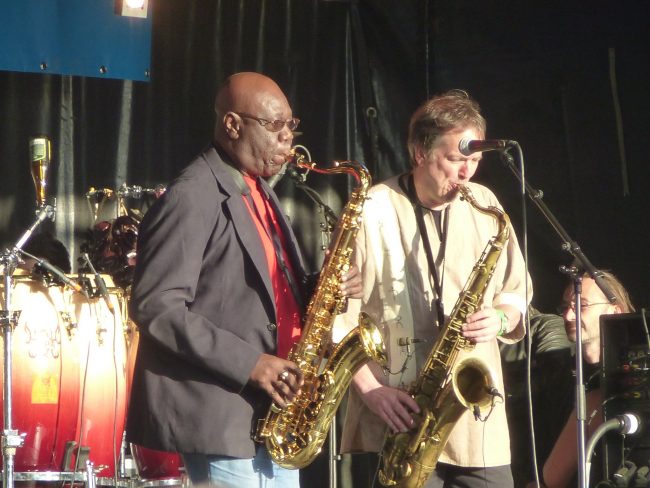 The great African jazz player, Manu Dibango, passed away on March 24, 2020. His cause of death is listed as a complication from the COVID-19 virus. Dibango’s full name is Emmanuel Dibango N’Djocke, and he was born on Dec. 12, 1933. Born into a Protestant Christian family, who was made up of rival Cameroon ethnic groups (mother-Duala, father-Yabassi).

His love for music shown brightly when he joined his mother (choir leader) in singing at their local church. At the age of 15, Dibango was sent to school in France. He finished his education in Saint-Calais and Chartres, and went to Reims, in Paris, to further his studies.

At the age of 17, he started classical piano lessons. After a couple of years, he switched to learning the saxophone. Music from Louis Armstrong, Duke Ellington, and other great jazz artists captured his attention, opening him up to a whole new genre of music. Being a quick study with both instruments, he joined forces with a noted Cameroonian guitarist/composer Francis Bebey. It was not long before they were recognized in their local jazz circuit.

He moved to Brussels in 1956, where he learned to play the vibraphone. Also, he extended his singing style to include some of the various West African forms of vocabulary. It was at that time he decided that he wanted to incorporate popular African traditions into jazz.

The young musician joined African Jazz, led by Joseph Kabasele, and toured around Europe in 1960. The group moved to the Democratic Republic of Congo after they toured. Dibango stayed with the band for three years.

Upon leaving the band, he moved back to Cameroon where he established his own band. Continuing to merge African traditions with his jazz, he moved back to Paris in 1965, where he backed many African and African-American artists in soul music.

Dibango’s song, “Soul Makossa,” was commissioned by the African Cup of Nations in 1972. This song was the turning point ultimately boosting his career. Despite being a big hit in Europe, he was unknown in the United States until “Soul Makossa” debuted on a New York radio station in 1973. After this release he took American by storm, people really enjoyed his style.

Dibango recorded songs with many other musicians throughout his many decade’s career. Michael Jackson paraphrased in Dibango in his song “Wanna Be Startin’ Somethin’,” in 1982. He also wrote many songs for film and television. In 2004, he was named the UNESCO Peace Artist of the Year for his support in various humanitarian causes.

The jazz musician was 86 years old at the time of his death. He is survived by his four children and shall be greatly missed. May he rest in peace.

One Response to "Manu Dibango, African Jazz Musician, Passed Away at 86"