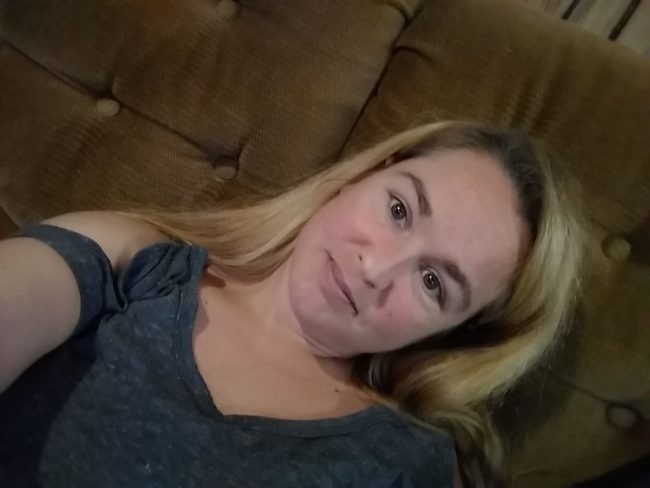 *Further Update for Her*

She reported that by day 12 she was feeling much better. Her symptoms have improved each day since. Today, April 13, 2020, Walker has told this author that they are doing much better. She is extremely grateful for the fact that COVID-19 was not as extreme as it has gotten for others.

On her eighth day of having COVID-19, all she wanted to do was sleep. She said she “still had a headache,” and was still having issues with breathing. Walker went back to sleep and hoped that it will help heal her body.

The report she gave on her ninth day was not any better. She still felt horrible, breathing was still troublesome, and she had a severe migraine. There are many well wishes and prayers via social media.

She stated that there was no change in her symptoms on the tenth day. On day 11 she had no energy at all, with a bad headache, and severely congested. By day 12 she reports that she is feeling slightly better. Walker will continue to update her status daily until the situation is over.

When COVID-19 Hits Close to Home

Renee LeAnn Walker, a resident in Conway, New Hampshire has become a victim to COVID-19. Walker is this author’s stepsister. She was infected with the virus because a man chose not to listen to the advice he was given, and self-quarantine. As a result, he came into contact with COVID-19 and was contaminated.

This man decided that going to a ski resort was a better option than quarantining. He just happened to choose the one that Walker worked at. Many employees at the resort had seen the man laughing about the situation. When the resort managers found out about the man and the self-quarantine, they shut down to prevent this situation from happening again.

Unfortunately, the virus had already been passed along to one of the workers at the resort. Walker has been posting daily updates on her social media accounts reporting on how she has been feeling since she tested positive.

Walker and her fiance were told on March 24, 2020, that they had been infected with COVID-19. The next day, Walker reported that she had already begun to “feel like death warmed over. My entire body hurts, have a migraine from hell, and shortness of breath.”

On day three, she posted that COVID-19 felt like having the flu but worse. Walker wrote that the body pains felt like she had been in a car accident. Walker stated that she still had a migraine and that from the back of her head, down to her shoulders, arms, back and into her chest hurt. Also, she cannot take deep breaths and there are times when she starts to cough she can not catch her breath. At times when she stands up, she becomes light-headed.

She reported that she could not sleep due to being in so much pain on day four. That she would get short of breath with even the smallest movement. Even the slightest of noises made her head want to explode. Coughing made her lungs feel like they are on fire and they felt like they were going to explode.

More on How Life With COVID-19 Is

On day five, she stated that her symptoms had not changed from the day before. She said that she was thankful her symptoms were not as bad as some had gotten. She mentioned that she was glad that she was lucky enough to grow up in a household surrounded by family members who worked in the medical field. Due to them, she knew how to treat her symptoms as they began. Making a note that the virus had to run its course.

On her sixth day with the virus, Walker felt like she had a never-ending migraine, with shortness of breath. “Hmmm, how much longer will this virus go on?”

A week into COVID-19, she reported that she felt the worst that she ever felt. Walker said she felt spaced out but at least her headache was not as bad as it had been. She was still having some trouble breathing and her chest still really hurt. “It is what it is, it could be worse, but I am thankful that I’m not worse.”

Asking Walker About her Situation

At that time, the couple was also told, “the quarantine would not be over until they had gone symptom-free for three full days.” She stated that her fiance’s symptoms were milder than her own.

This author asked Walker if there had been any assistance for both of their needs? She answered, “We pretty much had everything we needed already. We were preparing for my job shutting down from ski season. Where I work we shut down for about six weeks between ski season and summer.”

To the question, “If there had been a medical provider checking in on them at least?” She answered, “ My doctor’s office has been checking in every couple of days.”

This author shall be following up with Walker frequently and updating this story as it progresses.