Iranian general warns his finger is on the trigger, shows support for Syria 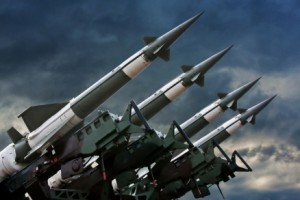 While the news is all about Wisconsin and the Presidential Race, there are other things happening around the world. People often question why Obama was so quick to attack North Africa, but he will not strike Syria. There is a reason for that. You remember my article about Russia building up arms in anticipation of an Israeli attack on Iran? Now Iran is warning about Syria. In the face of Western pressure to do something about Bashar Assad and his killing of defenseless women and children, the Iranian Government warns against us taking any action, and that is why Obama is not attacking Syria. The pro-Assad resistance has its finger on the trigger, and the aggressors will not survive the conflict, according to Brig. General Massoud Jazaeri, speaking to Mashregh, a media outlet run by the Revolutionary Guard.

Iranian officials often refer to Iran, Syria and Hezbollah in Lebanon as the resistance front. Mashregh, in March, said that Iran’s armed forces had formed a joint war room that included officers from Syria, Iran and Hezbollah for a coordinated military response to an attack on Syria. “A conflict in Syria will engulf the region and its main victims will be the people of Syria themselves,” Jazaeri warned the protesters. “The Zionist regime and the interests of the enemies of Syria are all within range of the resistance fire. At the right time, people of the region will retaliate against these actions. The defeat of the enemy at this stage will be a big event and, God willing, we will witness that.” He was referring to a myth that Western forces were at fault. There have been several reports alluding to the Revolutionary Guards’ involvement in the Syrian suppression. The deputy commander of Iran’s elite Quds Force, Cmdr. Esmail Ghani, said his forces have been playing a “physical and nonphysical” role in Syria. Syrian protesters were called“rabble-rousers” who are “puppets of Zionists and the United States” and that their chanting slogans against Iran and Hezbollah “will be their last stand.”

Brig. Gen. Mohammad Reza Naqdi, who has been sanctioned by the U.S. Treasury Department for human rights abuses in Iran, told Lebanese TV Al Manar, “After the expulsion of the Americans from Iraq, and the disruption to their defensive posture in protecting the Zionist regime, America, in order to defend the regime of the occupier of the Quds (Jerusalem) is after a new scenario in Syria. … But they will be defeated.”

Naghdi also said the West was wrong in believing that international sanctions against Iran will force the Islamic republic to accept demands that it yield on its clandestine nuclear program.

“Sanctions have had a lot of effect on Iran, but one positive one is the growth of science and internal production. … If the American president did not have his hands in the blood of nations of the world, specifically Iraq, Afghanistan, Lebanon and Palestine, and had not embraced torture, we would have given him a national medal for his service to the Iranian nation for imposing sanctions.”

The mullahs ruling Iran, based on centuries-old hadiths, believe that an ensuing attack on Syria or Iran would cause a counterattack on Israel that will trigger the coming of “Mahdi,” the Shiites’ 12th imam and the last Islamic messiah. Both those events are looking increasingly likely as Assad continues to murder his own people and Iran continues its quest for nuclear weapons. The question remains: What will Obama eventually do? But if history proves to repeat itself, he will go weeks or months before doing anything.

4 Responses to "Iranian general warns his finger is on the trigger, shows support for Syria"