Dolphin Dies in China by Tourists Forcing it to Take Photos

By Cayce Manesiotis on November 19, 20134 Comments 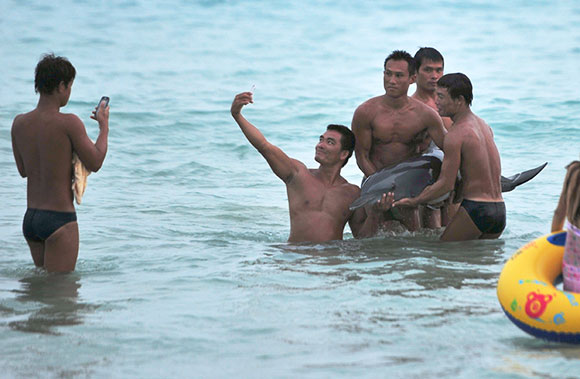 Outrage in the online community across China followed, as people were angered at the photos that circled around the internet of the tourists who lifted the dolphin up from the water. The South China Morning Post said the people used the dolphin as a prop in their photos for over 30 minutes.

Lifeguards on Sanya beach finally guided the dolphin away from the group taking photos but their attempt to stop the manhandling was too late. Some reports claim the dolphin died from the excessive bleeding while others say it occurred from choking on water.

The souvenir photos were scolded by Chinese news stations and on social media sites such as Sina Weibo, where the photos of the dolphin went viral. The top hash tag on Sina Weibo was #PleaseLetGoOfThatDolphin. Backlash included claims that the tourists failed to care about the dolphin in distress and instead preferred to capture photos to share with friends. Others said it was a typical clueless manner in which Chinese people like to show off with online photos.

China has no official laws governing animals that are not endangered but it does have a growing animal rights community. Web users in China scolded the reputation tourists have and how the dolphin incident makes it worse. Everyone was appalled at how a dolphin could die on the beach in China from tourists forcing it to take photos.

Chinese tourists have earned a bad reputation while traveling abroad. This summer in Luxor, Chinese tourists vandalized a 3,000 year old sculpture while on vacation in Egypt. International media was alerted and China was condemned online. The Deputy Foreign Minister, Wang Yang, criticized their behavior as “uncivilized” and said “it damages the image of the Chinese people and has a very bad impact.” How Chinese should behave abroad was the main topic and now after the dolphin incident, tourists on vacation in their home country are also being scrutinized.

Some people blamed the social media culture instead. They claim platforms such as Weibo created a culture of “instant sharing.”  A state run website, Rednet.cn, included commentary on the dead dolphin that claimed if phones and social media platforms did not exist, “people would not take the weakened dolphin out of the water so quickly for photos, even if they are exciting about seeing a dolphin” because there would be no place to put the photos.

A dolphin died in China because it was forced to take too many photos with spectators who wanted to capture the moment and upload it to their social networks. Many who hear this story will wonder the same thing a Chinese user said, “When even the basic respect of life is lost, I just want to say, how can I be proud of you, China?”