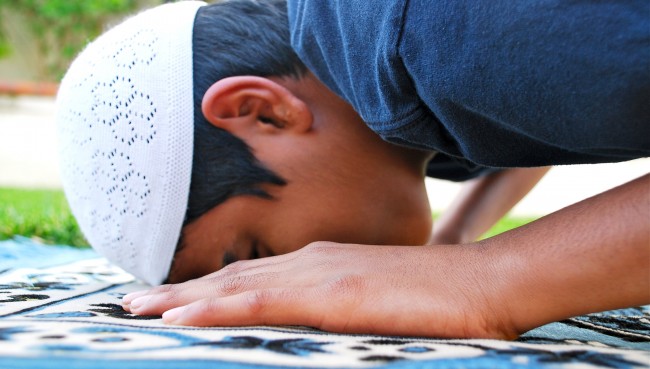 Islam is vastly misunderstood among Jews and Christians, and a veil has been cast upon its true character. The essence of Islam is a commitment to live in peace through submitting to the will of Allah (God). The Prophet Muhammad , and as is said in Islam, peace be upon him (PBUH), was always described as a moderate man.

According to the world preeminent Islamic scholar, Dr. Khaled Abou El Fadl, in The Great Theft: Wrestling Islam from the Extremists “Using Islamic theology and law as an authoritative frame of reference does not necessarily mean believing in a theocratic state or imposing draconian laws upon an innocent group of people.”

Fundamentalists, by definition, demand strict and literal adherence to orthodox theological doctrines, which are usually in reaction to Modernist theology. The term Jihad means to fight or struggle against evil action, thought, and aggression. The term “Islamic terrorism” does not exist in the Holy Book, the Qur’an (formerly spelled Koran).

As written by Dr. El Fadl, Islam has been encroached upon and corrupted by extremist powers. The themes of these violations include the role of women, the nature of jihad, human rights, democracy, warfare, and terrorism. Dr. El Fadl helps to establish the vision of a moderate Islam, which is, in fact, a reclaiming of Islam’s moral tradition. According to Dr. El Fadl, moderates constitute the silent majority of Muslims in the world.

Every religion has their version of extremists. Those who use religion to harm other people are criminals, using the religion as a shield to prevent their incarceration. Among those who consider themselves Christians are extreme “tea party” members, Ku Klux Klan, Skinheads, the religious right, the Puritans during the Salem Witch Trials, slave owners and traders, Nazis and Neo-Nazis (such as Marine Le Pen followers in France, Jobbik party members in Hungary, and the Social-National Party in Ukraine).

The term “Islamic Extremist” is about as accurate as “Christian Murderers.” It is an oxymoron, twisted and farcical logic, defaming the reputation of Islam to justify wrong actions. According to Muslim friends, the true intent of Islam is for Muslims to use their conscience to balance their deeds in accordance with Islamic rule, resulting in absence of fear from judgment and inner peace.

In fact, when militant Islamic extremists, such as the Taliban or Boko Haram, are interviewed, they are unable to explain what the Qur’an is about and cannot recite verses (which are normally recited by Muslims five times a day in prayer). However, the media’s focus is on anything connected with Islam without seeing differentiation that Muslims themselves make.

The vision of the Islamic Society of Boston Cultural Center (ISBCC) is to build a community of leaders rooted in the Islamic tradition, committed to American ideals and empowered to serve the common good. However, in order to maintain their vision, they accept no monies from any government and rely solely on private donations, large and small.

To visit ISBCC is to enter a place of prayer with people of diverse backgrounds coming together. Prayers are held there five times per day, from just before sunrise (3:30am at this time of year in Boston) until after sunset (10:00pm) and all are welcome at any time to attend. All of the women who attend the Islamic services wear a head scarf and some are veiled, in the same way that historically Christian and Jewish women were.

At the office of the ISBCC, there is a drawer full of headscarves for those who want one. Posted on the walls is the Center’s Vision statement alongside of a notice of what to do if stopped by the police or other authorities. Muslims must be ever vigilant of their surroundings, especially if they are obviously religious in attire or behavior. This is due to the subversive behavior of the minority fringe.

When newcomers enter the Center, they need only introduce themselves and they are embraced as a brother or sister, regardless of religion or origin. The uninitiated who wish to attend a prayer service can be provided a guide (an employee of the Islamic Society) who will walk the guest through the service.

The intent of the Center is to serve as a “messenger” of peace and, as such, they offer counseling services, legal assistance, and a food drive, among other services. They also have a preschool, a K-8 school, an institute that teaches the Qur’an to adults and children, as well as a continuing education institute. The mission of the children’s school is to educate and prepare their students to be righteous, responsible, and productive citizens who are able to give back to the society and make a difference in the world.

Executive Director Mr. Yusufi Vali has a background in social justice work, which is visibly authentic and stems from his personal experiences. Born in the United Arab Emirates to parents of Indian descent, he moved several times before settling in Kansas City, Missouri, at age 9, where he went from a comfortable existence to near poverty level.

When asked about whether so-called Islamic extremists are, in fact, true Muslims, he speaks of non-judgment of other Muslims, but noted that certain actions go against the Prophet Muhammad (PBUH). While Mr. Vali acknowledged that he himself is not an Islamic scholar, he emphasized that Islamic actions are guided by faith and that, at its core, Islam is moderate and focused on peace and justice.

He said that the actions of any people must be viewed in the historical and cultural contexts in which they exist. Therefore, certain practices stem from poverty or the self-interested leaders who don’t care about what people need. He said that the decisions of monarchs, dictators, and despots, and extremist leaders deeply affect members of nations where Islam is practiced. And, these leaders’ actions have been destructive locally with extensive negative worldwide consequences.

Dr. El Fadl likens Islamic teachings to Jewish Rabbinic tradition, saying that in both traditions, students are encouraged to consider “a wide range of alternative interpretations and opinions on any particular point of law.” He explains that Islamic law (known as the Shari’a) contains “a wide range of ethical and moral principles, legal methodologies, and many conflicting and competing judgments.”

Mr. Vali explained that when the Prophet Muhammad (PBUH) was alive, he stopped practices such as baby girls being buried alive. And, the Islamic Society of Boston Cultural Center uses the principles of Islam regarding the role of women. (It has four women on its Board of Directors and women in leadership roles.) The community respects the rights of all people in its efforts towards peace.

The ISBCC is serious about its outreach to all members of the community. Yusufi Vali mentioned that both the senior rabbi of Temple Israel of Boston, Ronne Friedman, and Reverend Nancy Taylor, Senior Minister of Old South Church, had spoken at the ISBCC and prayed over the community.

And, in January 2014, on Martin Luther King Shabbat of Justice, Imām William Suhaib Webb of the ISBCC spoke at Temple Israel of Boston. (See video below.) In a follow-up letter, he says that “Years of discord have done little to serve [our] broader communities…” And, he encouraged the celebration and appreciation of “each other’s stories” so as to “build one community around … mutual interests … [in order to] extend God’s grace to those around us.” In this way, Islam, Judaism, and Christianity may hold up a shared veil of respect and protection, encompassing a wider community.

2 Responses to "Islam Unveiled for Jews and Christians [Video]"