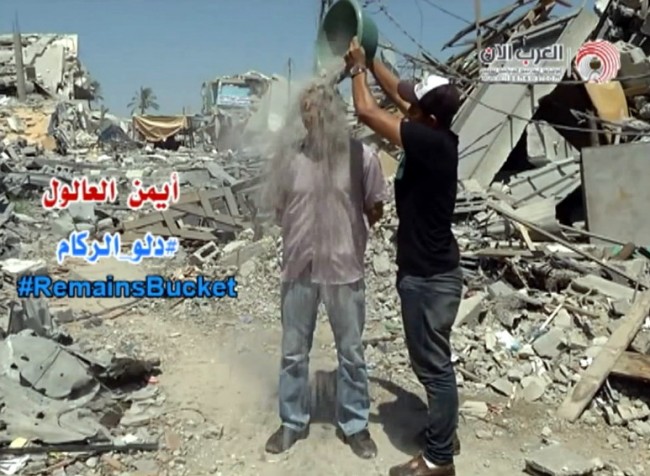 Most people in the world have heard about the ALS Ice Bucket Challenge, still doing the rounds on the social media, but not so many know that a journalist in Gaza has launched a “Rubble Bucket Challenge” to raise awareness to the plight of Palestinians on the Gaza Strip.

Back on July 7, Israel launched “Operation Protective Edge, and since then more than 17,000 homes have been either demolished completely or damaged beyond any hope of repair from the conflict.  2,100 Palestinians, the large majority of which were innocent civilians and children, and 68 Israelis, mostly military people, have tragically lost their lives.

While the Gaza Strip is now living under a mutually-agreed cease fire, Ayman Aloul, a journalist based in Gaza, noted the huge success of the recent ALS Ice Bucket Challenge and the idea was born of a Palestinian equivalent in the form of the “Rubble Bucket Challenge.”

In the video below, Aloul can be seen standing amidst the rubble and dust of buildings and homes destroyed by the IDF attacks and in the same way as the ALS videos, he launches a challenge, nominating people to pour buckets of dust and loose rubble over their heads. This is to raise awareness, not only to the losses suffered by the people on the Gaza Strip, but also to the lack of water and other essential services needed by the people living there. He said that he is not nominating specific people, but all people who sympathize with the people of Gaza.

Aloul states that they looked for a bucket of water, but that the use of water is more important than pouring it over their heads and also that, even if they had the water to spare, it would be impossible to freeze it due to the lack of electricity in most areas of Gaza. This is basically the message that Gaza wishes to get across to raise awareness and why they launched the “Rubble Bucket Challenge” in the first place.

He challenged five well-known people in the world to accept the nomination saying if they accepted the nomination, he would have succeeded in sending his message about Gaza.

The video has received almost 75,000 views and reportedly there have been several videos in response with people from the U.S.A., Germany and other countries participating by pouring buckets of rubble over their heads and nominating their friends to do similar actions.

On the “Rubble Bucket Challenge” Facebook page, it states that this is a campaign with which they hope to raise peoples’ awareness to the war on Gaza, an area where innocent people are bombed inside their own houses, hospitals and schools.  At the time of writing, the page has received almost 11,000 “likes.”

Abu Yazan, another Gaza resident who posts regular updates to his Facebook page throughout the attacks and on a continuing basis, posted a video to Facebook, which is included below. In it he explains, like Aloul, that in Gaza, they don’t have water, and they couldn’t make ice anyway because there is rarely electricity available. He said that he, his cousin Hafiz and his nephew Khalid used the remains of a demolished house to participate in this challenge.

To see more about the Rubble Bucket Challenge response videos, it is possible to follow the hashtags #rubblebucketchallenge, #dustbucketchallenge and #remainsbucket on Twitter.

While this challenge was not launched in an effort to raise money, participants in Gaza merely wish to raise awareness to their plight by sharing the “Rubble Bucket Challenge.”