Confederate Flag Is a Visible Declaration of Segregation 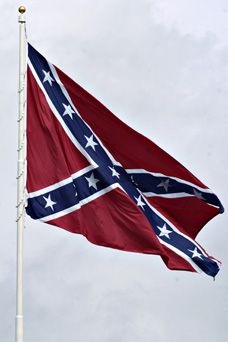 In the aftermath of the Charleston shootings, many Americans are struggling to find ways to dismantle the structural racism that has managed to survive for centuries. Deeming the Confederate flag a visible declaration of segregation the world is divided on what should become of the flag. The defense of the flag which for many represents hate and not heritage, confirms racism still lives on in the form of Confederate pride.

The tragedy in Charleston has revived the movement to remove the Confederate battle flag from the grounds of the South Carolina statehouse. Those who want the flag to come down view its existence as a reminder of the war fought to maintain slavery and white supremacy. Others view is as a part of history and Southern heritage. However, states have been taking Confederate flags and monuments down for years and refusing new requests to fly them.

Some argue that it makes no sense for a country which is stained by race inequalities, gun violence and hate crime that the focus would center on a flag. However, the defense believes the Confederate flag symbolizes the ongoing problem of racism. Symbols are important expressions of what matters to society. They are commonly used to construct identity and communicate beliefs. Amid today’s controversy, the Confederate flag is viewed as the visible declaration of segregation.

The flag has long been divisive. Some believe it carries an insignia that is intricately connected to hate and white supremacy, especially since many white supremacist and neo-Nazi groups have adopted it. Descendants of Confederate soldiers who served in the Civil War argue the flag is an important emblem of their heritage. Despite the varying beliefs, tensions over the Confederate flag are on the rise as it retains the perception of a cultural weapon.

Following the tragic shooting of nine innocent worshippers at the Emanuel African Methodist Episcopal Church, a movement is calling for the removal of the Confederate flag. It is time to re-evaluate the country’s relationship with the legendary Confederate army symbol. It seems although the Civil War ended years ago, a new beginning never officially took place. The Confederate flag allows citizens to maintain allegiance to the cultural restraint of the old Confederacy.

Although the flag may be hailed for different reasons, the absence of true transformation causes the flag to maintain an association with Jim Crow segregation, slavery, and white supremacy. At this point in history, it is a symbol that is sending the wrong message to minority citizens. Why continue to celebrate a symbol which is so closely associated with a war which begun to maintain slavery?

After the Charleston massacre, South Carolina Governor Nikki Haley said it was time for a change. Countering her original stance, Haley made an emotional declaration for the flag to come down. She believes that removing the symbol which has caused so much division in the state will allow the citizens to move forward in harmony. Haley said:

For good and for bad, whether it is on the statehouse grounds or in a museum, the flag will always be a part of the soil of South Carolina. But this is a moment where we can say that the flag, while an integral part of our past, does not represent the future of our great state.

In the aftermath of the Charleston massacre, many are struggling to find ways to dismantle the racial tension which refuses to die. The flag which was once a symbol of Confederate pride has now been deemed a visible declaration of segregation. After causing a major divide in the country, the future of the Confederate flag which has flown for centuries is now “up in the air.”

3 Responses to "Confederate Flag Is a Visible Declaration of Segregation"