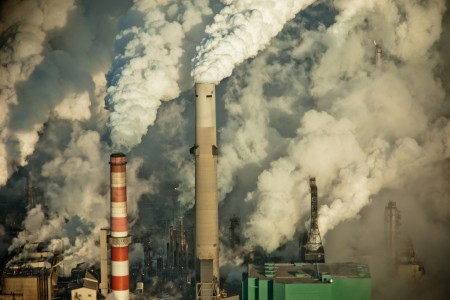 Deniers of human-induced climate change tend to cite a number of natural causes to explain why the average temperature on Earth has risen by 1.4 degrees Fahrenheit in the last century. Even though 96 percent of scientists wholeheartedly agree that humans are the main cause of climate change, some are still skeptical of even overwhelmingly thorough data. However, a new study based on findings from NASA’s Goddard Institute for Space Studies has found that humans are, in fact, the real cause of climate change.

Scientists state that summer 2015 will be the hottest ever recorded. Politicians and lawmakers who deny the validity of climate change blame the Earth’s natural life cycle. Some have even thrown snowballs on the floor of the U.S. Capitol to stress their opinion that humans cannot possibly be the instigators of a world-threatening event. These political stunts and data gathered by scientists who are funded from special interests have skewed vital information regarding the health of Earth’s climate. So, what exactly are the real causes of climate change?

Is it the Earth?

The Earth wobbles on its axis as it spins, and it tilts at a 23.5 degree angle away from the plane. This makes the planet’s orbital pattern elliptical, not perfectly circular. Every 21-26,000 years, the Earth’s precession completes a full cycle. During the cycle, the point at which the Earth passes closest to the sun is called perihelion, and the point furthest from the sun is called aphelion.

While the Earth’s orbit may change minutely over tens of thousands of years as it completes its precession, it still has some effect on the climate change experienced today, according to some scientists. Few studies show that even a few degrees in variation in the Earth’s orbit may have caused more solar radiation to hit the Earth.

However, NASA’s study shows that the orbital changes since 1880 have stayed fairly negligible with a 95 percent confidence. Scientists can create paleo climate models from ice cores extracted from deep in the ice caps of Antarctica. Findings have shown that although the Earth’s axis correlates with certain stages of cooling and warming periods, but nothing in the last 125 years has indicated that an ice age may happen anytime soon. Therefore, climate change cannot be blamed on a wayward axis.

What About the Sun?

Climatologists have stated that historic data shows the Sun went through a small cooling period around 1750. Some scientists now believe Earth may be past due for another one of these solar winters. In a phenomenon called a solar minimum, every 11-year cycle of the Sun ends with a small cooling period. Every few hundred years, there is a grand solar minimum, which scientists at the British Met Office Hadley Center have stated could hinder solar activity by as much as 20 percent over the next 40 years.

With that said, NASA’s study shows that solar activity has not been deemed irregular over the last 125 years, and has only varied in between cycles. These changes have had little to no effect on the Earth’s overall climate as temperatures continue to rise. Moreover, changes in solar activity would not cause a nearly two degree rise in the overall temperature of the Earth during the period of the Industrial Revolution.

Within the past few years, there have been numerous volcanic eruptions all over the globe. Considering volcanoes release massive amounts of gas into the air, could this be the climate change culprit?

NASA’s data also suggests an answer of “no” on this natural cause. Carbon emissions from human industry are over 100 times more than what is released in the Earth’s combined volcanic activity. Furthermore, eruptions release sulfate chemicals into the atmosphere that actually bind to ozone to create a cooling effect.

These findings prove that natural causes are not to blame for climate change, and that humans are. Industry has led to the mass collection of natural resources, causing the Earth to become more vulnerable. The depletion of resources is where humans are to blame.

Humans have cut down trees, paved through fields, and plowed through pastures on nearly half of the Earth’s land surface. Deforestation is said by many to be cutting the natural supply of oxygen, and increasing atmospheric carbon dioxide.

However, the findings from NASA show that deforestation has led to dark-colored forests, namely the tropical rainforests near the equator, beginning to yield to lighter patches of younger foliage, which actually reflect more sunlight. Therefore, it has a slight cooling effect on the Earth.

Some pollutants have been found to cool the Earth’s atmosphere, like sulfate aerosols found in spray cans and from coal burning. NASA’s study shows that although aerosols and chlorofluorocarbons are seen as a sin to use, they fight the warming of the Earth.

The Answer Is Carbon Emissions.

Carbon emissions from the burning of fossil fuels have plagued the health of the Earth since the Industrial Revolution began in the 18th century. According to NASA’s data, atmospheric carbon dioxide levels are 40 percent higher today than in 1750.

Due to this egregious attack on the environment, scientists state that the Everest glaciers will be gone by the end of the century. Although only four percent of all water on Earth is held in glaciers, if they were to melt by 2100, large metropolitan areas along the coast would be underwater. Considering over 80 percent of the world’s population lives within 200 miles of the coastline, such a man-made natural disaster would displace an unprecedented number of people, causing a breakdown of society.

Therefore, according to the data gathered by NASA, humans are, without a doubt, the cause of climate change. Can humans stop it?