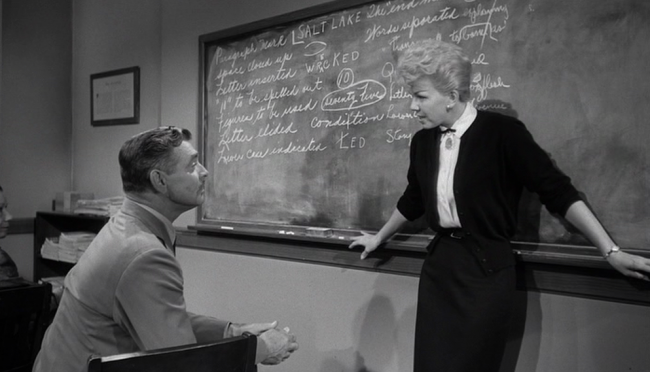 Netflix has recently added another must-see gem to its impressive classic movie library, in the form of the black & white, romantic comedy, “Teacher’s Pet” (1958). It stars legendary actors Doris Day (“Please Don’t Eat the Daisies”) and Clark Gable (“Gone With the Wind”), along with a fine supporting cast which included Gig Young, who won an Oscar for his role in 1969’s “They Shoot Horses, Don’t They?” The film, which was directed and produced by George Seaton (“For Heaven’s Sake”), is set in the world of Journalism and examines different approaches to the subject matter. The film’s lively tone, comedic banter, and engaging dialogue make it a classic movie to re-watch several times over.

In the film, Gable plays old school journalist and newspaper editor James (Jim) Gannon, who grew up and learned his craft via the school of hard knocks. Meanwhile, Day portrays Journalism instructor Erica Stone, who is well-educated and the daughter of a Pulitzer Prize-winning journalist. Gannon is set in his ways and opposes the idea of higher education. More to the point, he is intimidated by it and feels inferior in the academic world. On the other hand, Stone is blinded by the perceived accomplishments of her beloved father, who is revered by the journalistic world and Gannon himself, at least initially when he realizes the connection. However, circumstances change as the film progresses and both characters are faced with hard truths, as well as startling realizations that alter their core perspectives.

The classic movie features witty banter and winning chemistry between not only the leads, but it also extends to the supporting cast. Namely, in the form of Young, who manages to produce potent sparks with both Gable and Day. While Young’s Dr. Hugo Pine is initially introduced as a would-be romantic rival for Erica’s affections, it is more of a red herring than anything else. Turns out, Dr. Pine is co-authoring a book with Stone about her late father and Erica considers him a friend rather than a love interest. Moreover, after a brief rivalry, Hugo and Jim Gannon strike up a buddy rapport and the two become confidantes pretty quickly. Thus, the classic movie’s potential love triangle is more an act of misdirection than an underutilized plot device. Ultimately, the main characters in this classic movie are kept apart by their diametrically different perspectives and secrecy, as Gannon hides his true identity from Stone in an effort to win her over. 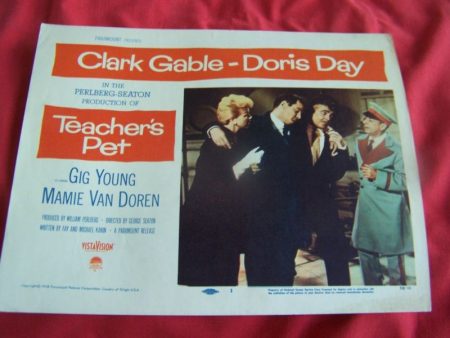 As the film progresses, both characters realize they have a lot to learn and acknowledge their growing feelings for one another. Moreover, Jim and Erica come to understand and find merit in the each other’s point of view. However, whether or not they can come together as a couple is left on an ambiguous note. While the main characters in this classic movie face some hard truths and difficult realizations, it is safe to say that conflict will be a constant presence in their relationship, given their very different approaches and perspectives. This begs the question–will their love win out and overcome their differences? “Teacher’s Pet” is a classic movie that does not provide a definitive answer to that query and the film is all the better for it. In fact, this aspect is part of what makes the classic movie so re-watchable.

As a journalist and editor, this author also found the examination of the film’s subject matter–the field of Journalism–and the differing perspectives offered on the topic intriguing. The debate over the need for academic enrichment versus the value of real world experience cannot be quantified, as both approaches yield tremendous contributions and strengthen each other. Moreover, it is important to note that these perspectives are dependent upon the individual(s) involved. While some people thrive in the world of academia, others are not equipped for it but will succeed by forging their own path as self-starters. The annals of higher education and school of hard knocks both have inherent value, which offer practitioners of either approach new ideas and experiences. “Teacher’s Pet” shines a light on this social debate and allows the audience to see both sides. When viewers are looking for a classic movie to re-watch, “Teacher’s Pet” should be at the head of the class.