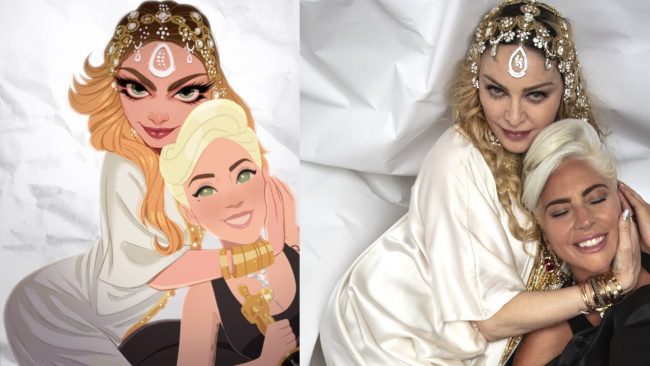 Two of the most controversial artists in pop music are undoubtedly Madonna and Lady Gaga.

The fans of these two artists have been rivals, feeling their singer is better than the other.

Even though these two artists, have their similarities, the majority of millennials in today’s society consider Lady Gaga to have taken the place of Madonna as the “Queen of Pop.”

The majority of Madonna‘s songs were co-written with Patrick Leonard. Leonard once said in an interview: “I am one of those people who hide behind a curtain. If Madonna did not sing the songs, they never would have been heard. She has made it possible so I can do what I am doing now.”

Madonna was nominated multiple times for the Songwriters Hall of Fame. Leonard said he did not care if she went in without him because he does not believe in or think awards are important.

Lady Gaga writes the majority of her own songs, and if she did not write it from scratch, she is an active participant in the process. Gaga has said she must be included in the song process to feel emotionally connected to it.

Gaga is also known to have written music for some of the most prominent artists around such as Jennifer Lopez “Hypnotico;” Adam Lambert “Fever;” Michael Bolton “Murder My Heart;” New Kids on the Block “Full Service;” and Britney Spears “Quicksand.”

Madonna is known for his pop sounding vocals. Gaga, on the other hand, has been able to sing different genres of music. Also, she has sung those genres live without lip syncing. For example, she has performed Big Band with Tony Bennett, Rock with Metallica.

Both Madonna and Gaga have sung tributes to other artists. Who could forget Madonna’s tribute to Prince? Critics gave it horrible reviews. Immediately after her performance, BET wrote “Yeah, we saw that. Don’t worry. We got you.” The reviews forced her friend to step up and defend her performance.

In contrast, when Gaga sang “Sound Of Music” at the 2015 Oscar Awards not only did her performance received critical acclaim, but Julie Andrews said herself that Gaga hit it out of the ballpark.

Gaga Is An Instrumentalist

While not at an expert level, Madonna can play some guitar. Gaga is known for her piano playing. She also plays the drums, synthesizer, keyboard, acoustic guitar, and keytar.

Gaga Does Not Use Controversy To Promote Herself

Gaga is being Gaga, wearing her outlandish outfits, which she has toned down as she has aged and matured.

Madonna uses shock value for attention and to get her name in the paper. She has done this throughout her career.

At the start of her career, she was seen dancing in front of a burning cross.

Later she flashed a swastika on Marine Le Pen’s face at one of her concerts.

Immediately after the movie theater shooting in Colorado, despite being asked not to, Madonna brought an AK-47 and other guns on stage during her performance.

Most recently, she accepted $1M and received permission to bring an entourage of 160 people with her to Eurovision 2019, where she would sing two songs during the finale.

Madonna chose to do this despite the music community and several civil liberties groups telling her not to due to the human rights violations against Palestine.

Showbiz 411: Madonna: Writer of Her Songs Explains How “Like a Prayer,” Other Hits Were Composed
Billboard: 6 Songs You Didn’t Know Lady Gaga Wrote
Cinemablend: What Julie Andrews Really Thought Of Lady Gaga’s Sound Of Music Tribute
Latin Times: Why Lady Gaga, Not Madonna, Is Now The Queen Of Pop