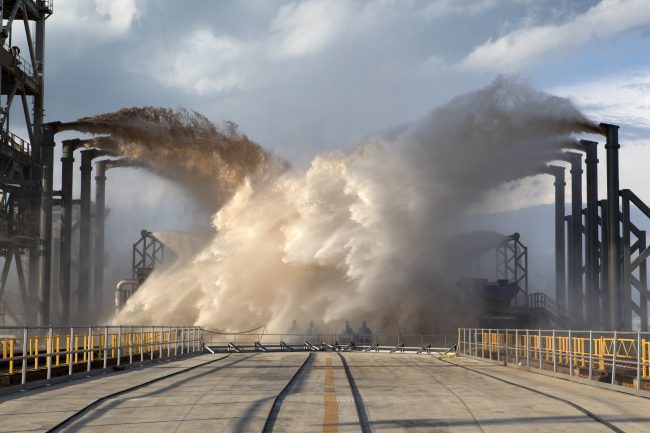 Space Exploration Technologies, SpaceX for short, was founded on May 6, 2002, by Elon Musk. The company manufactures and launches advanced rockets and spacecraft. Musk’s dream is to revolutionize space technology with the ultimate goal of enabling people to live on other planets.

In September 2008, SpaceX developed a liquid-fueled rocket called the Falcon 1, which became the first privately developed rocket to reach Earth’s orbit. In December that same year, NASA awarded SpaceX with a $1.6 billion contract for Commercial Resupply Services (CRS). CRS consists of flights that deliver cargo and supplies to the International Space Station (ISS).

In July of 2009, the Falcon 1, Flight 5 became the first privately developed liquid-fueled rocket to deliver a commercial satellite to Earth’s orbit.

The Falcon 9 was able to meet 100 percent of all of its mission objectives on the first flight in June 2010.

On Dec. 8, 2010, SpaceX’s spacecraft, the Dragon, became the first privately developed spacecraft to re-enter from low Earth orbit. The Dragon is a reusable free-flying cargo spacecraft capable of carrying both humans and cargo.

In May 2012, the Dragon became the first privately owned spacecraft to ever visit the International Space Station.

SpaceX developed the Grasshopper, which is a 10-story-tall rocket. It was designed to have Vertical Takeoff and Vertical Landing (VTVL) technology. They developed it to test technologies that are needed to get a rocket back into Eath’s atmosphere intact. It is the largest rocket-powered VTVL in the world. In October of 2013, the Grasshopper was able to complete a 744-meter flight, where it hovered for a moment before safely landing.

The Grasshopper uses the Falcon 9 for the first stage of take-off. Then it uses a single Merlin 1D engine. It has four steel landing legs that have hydraulic dampers and a steel support structure. All of this hardware is needed to make it able to withstand re-entry into Earth’s atmosphere, upon which it is designed to vertically land back onto the launching pad.

In December 2013, the Falcon 9 reached Geosynchronous Transfer Orbit (GTO), this is also known as Geostationary Transfer Orbit. This is an elliptical orbit to transfer between two circular orbits of different radiuses in the same plane.

In the month of April in 2014, the Falcon 9’s first stage was able to land successfully into the Atlantic Ocean.

The Falcon 9 reusable test vehicle has completed the highest leap and it landing back down safely in June 2014.

The SpaceX program was awarded a contract in September of 2014 from NASA. The contract was to fly American astronauts into outer space.

By the time January of 2015 rolled around, the SpaceX program began a series of first-stage landing attempts using an autonomous spaceport drone ship.

Continuing with the progress they have been making, SpaceX has started creating a device that would enable astronauts to abort their launch at any time. In May of 2015, the crew of the Dragon tested a Launch Abort System.

On April 8, 2016, the Falcon 9 rocket was used to launch the Dragon spacecraft to the ISS. The first stage returned and landed on the “Of Course I Still Love You” drone ship.

After delivering its payload, the Falcon 9’s first stage was able to return to Earth for a second time on March 30, 2017.

The Dragon made its first re-flight in June 2017. The commercial spacecraft was on a mission to bring supplies to the ISS, and it was able to complete its mission and successfully landed once again

On Monday, Feb. 17, 2020, SpaceX launched 60 Starlink satellites. This is SpaceX’s fifth time doing this. Around 10:05 a.m. (EST) they successfully deployed the satellites from Cape Canaveral Air Station in Florida. The first stage seemed to almost miss its mark when it landed on an unmanned drone-ship that was waiting in the Atlantic Ocean.

SpaceX and others aspire to build a space-based internet system. Their thoughts are with a system like that it would be able to serve people who struggle on a daily bases to achieve access to the web every day. Their idea would eliminate the need for fiber optics and cellular connections. Services like that would essentially make SpaceX a telecommunications company that also launches rockets.

Once SpaceX’s Starlink takes off, the company will start selling shares to the public. The idea is that Starlinks will be able to beam down high-speed data from the network of satellites that orbit Earth. They hope to begin target services in the northern United States and Canada in 2020.

SpaceX has been able to dominate the commercial rocket industry. The U.S. military, NASA, and commercial satellite operators are customers of SpaceX.

With the new developments, the company has people wondering what is next for SpaceX.

One Response to "SpaceX New Technologies Working for US"